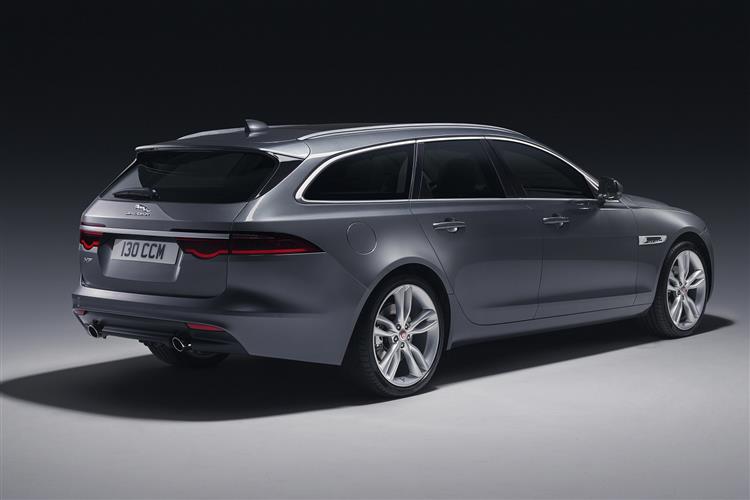 The MK2 model XF Sportbrake is an executive-segment estate that looks to offer a refreshing alternative to the usual choices in this segment, station wagon versions of the BMW 5 Series, the Mercedes E-Class and the Audi A6. This time round, this Sportbrake variant offers a 1,700-litre load space and can tow up to two tonnes, plus there's the option of AWD and it's faster, more efficient and more refined.

You don't associate Jaguar with estate cars. Which if you think about it is a little strange. The British have, after all, always liked them, whether as family load luggers or as stately 'shooting brake'-type designs. Even so, throughout its history, the Coventry brand has stuck to roots that lie in the production of saloons and sportscars. True, we did finally see an estate version of the compact X-Type in 2004, but even that was half-heartedly based on a Ford Mondeo and quickly forgotten when that smallest Jaguar model was quietly deleted from the range in 2010. Would this famous marque ever develop a proper estate model on its own purpose-built platform? That question was finally answered late in 2012 with the launch of this car, the XF Sportbrake. That model continued to sell, even after the launch of the second generation XF saloon in 2015. Now, second generation XF engineering has been delivered in estate form. What's it like?

As you'd expect, mechanically, the Sportbrake offers up much the same recipe as you'd find in its saloon counterpart, though in this case, there's the addition of self-levelling rear suspension to ensure an effortless ride, even when towing loads that can be as heavy as 2,000kg. The XF range hinges around 2.0-litre diesel four-cylinder engines and while that doesn't sound too exciting, it's where the big sales are. Most buyers opt for this unit in either 163 or 180PS guises, but the brand also offers a twin-turbo 240PS version of this powerplant. The two more powerful variants are offered with the option of AWD. There are some decent petrol options further down the range, also using the brand's efficient 'Ingenium' technology and exclusively available with automatic transmission. A 2.0-litre four cylinder unit comes with either 200 or 250PS, the pokier powerplant available with an AWD option. A 300PS twin-turbocharged 3.0 V6 diesel engine sits at the top of the range. Across the XF Sportbrake line-up, driving dynamics suit a relaxed but purposeful style. The chassis delivers near perfect 50:50 weight distribution and huge strides have been made to perfect refinement. The XF shares its suspension set-up with the smaller XE model, which means struts with double wishbones at the front and an 'integral link' independent set-up at the rear. The steering uses the same electric power-assisted set-up as the Jaguar F-Type and XE, while active dampers are on the options list.

Jaguar is off to a good start on the Sportbrake as the XF is widely acknowledged as one of the cleanest pieces of styling in its class. The rear glasshouse is artfully integrated into the car's existing chassis hard points, with a genuinely sleek roofline which arches over the rear quarter-lights. The window line tapers gracefully as the flanks meet the rear glass area with its continuous wrap-around curve. The one-piece tailgate incorporates a rear spoiler with integrated high-level stop light and a chrome blade finisher. The rear of the XF Sportbrake also sports full LED tail lights. The XF Sportbrake's load space features 1,700-litres of cargo capacity when all the seats are folded down. You also get under floor stowage and of course a 60:40 split rear seat. Cabin Air Ionisation gives you and your family clean air and an optional super-sized panoramic roof floods the interior with light. 'Gesture Control' lets you operate that panoramic sun blind or open the boot when your arms are full of kit. And there's the option of an 'Activity' key that allows you to do without the standard key ring yet still use the car when you're out and about doing things like swimming, surfing, cycling or running.

XF Sportback prices run from around £35,000 to just over £52,000, which is about par for the course in the full-sized BMW 5 Series Touring/Audi A6 Avant-dominated executive estate sector. The range starts at 'Prestige' level and then runs through 'R-Sport', 'Portfolio' and 'S' trim levels. Most customers will be attracted to the 2.0-litre Ingenium diesel, which is offered in 163 and 1290PS guises. Even base 'Prestige' trim is fitted as standard with soft grain leather seats, xenon headlamps and interior mood lighting. The 'R-Sport' model adds 18-inch alloy wheels and a bodykit, while 'Portfolio' spec gets you upgraded 'Windsor leather' upholstery and a 380-watt Meridian sound system. Top 'S' variants get 19-inch wheels, a more aggressive 'S' bodykit and Jaguar's 'Adaptive Dynamics' adaptive damping system. Across the range, the standard InControl Touch infotainment system is based around an 8-inch capacitive touchscreen and supports gestures familiar from smartphones and tablets such as 'swipe' to perform actions such as moving from one page to the next or to change tracks, and 'drag' to scroll across maps. The InControl Touch Pro upgrade offers a 10.2-inch touchscreen and Dual View technology which simultaneously allows the driver to see information such as navigation, while the front seat passenger watches TV or a DVD. Audio systems include the exceptional 17-speaker, 825W Meridian digital surround sound system.

The 2.0-litre Ingenium diesel engine is going to mop up over 75 per cent of all XF Sportbrake sales, so it's this that we'll look at in closer detail. In 163PS form with manual transmission, this powerplant delivers 62.8mpg on the combined cycle and a CO2 return of 118g/km. Trade up to the 180PS version of this unit and with automatic transmission, the figures are 61.4mpg and 120g/km - on 17-inch wheels. Add in AWD and those readings fall to 56.5mpg and 132g/km. With the '25d' version of this engine and AWD, you're looking at 48.7mpg and 153g/km, while with the '30d' model and rear wheel drive, it's 49.6mpg and 149g/km. As for petrol power, the '25t' variant manages 41.5mpg and 155g/km. The supercharged 380PS petrol engine predictably takes the wooden spoon in the efficiency stakes, as you'd probably guess, but 34mpg is far from disastrous. Residual figures for this Sportbrake variant look extremely promising, with industry experts predicting better retained values than the saloon.